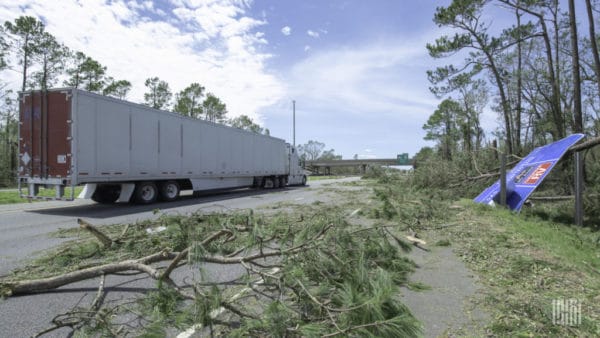 But COVID-19’s supply chain disruptions, like restaurant and meat plant closures, led to a reduction of the fleets, some of which couldn’t pivot quickly enough. With a reduction of capacity and general disruptions caused by COVID-19, Senior Vice President of Global Marketing at PowerFleet Craig Montgomery is concerned about the exacerbated strain on our supply chain during events like hurricane recovery. The SONAR chart below shows the climbing Outbound Tender Reject Index (OTRI), which correlates with tightening capacity in the United States.

“It’s hard enough when communications and cellular networks are knocked down, when roads are blocked and warehouses are destroyed,” Montgomery said. “And when you’re trying to bring loads into a COVID-19-affected world, it’s like a Rubik’s cube with 14 sides. It’s just that much harder on our fleets to deal with COVID issues and a natural disaster.”

Over the past six months, the industry has proved its resilience, arriving at a new normal. The beef and poultry plants have come back online. Most stores’ shelves are stocked with toilet paper. But while the industry has achieved a kind of stability, Montgomery wonders about the impact on a still fragile system in the face of hurricanes.

For instance, last week, Tropical Storm Beta delivered an onslaught of rain to the Gulf Coast, making it the 23rd named storm of 2020. While meteorologists from Colorado State University’s Tropical Meteorology Project predicted 2020 to be an active year for hurricanes, they initially predicted only 16 named storms back in April. Hurricane seasons typically run from June to the end of November, but August and September tend to see the highest concentration of storms.

“No Atlantic season on record has had this many named storms through late September, and they’ve definitely caused transportation troubles,” said Nick Austin, director of weather analytics and senior meteorologist at FreightWaves. “Hurricane Laura, a major Category 4 storm with winds of 150 mph at landfall, forced a shutdown of Interstate 10 from eastern Texas into Louisiana in late August. Hurricane Sally, just a couple of weeks later, shut down I-10 from Alabama into western Florida. The Pensacola Bay Bridge remains closed due to damage from Sally. Worse yet, the hurricane season doesn’t officially end until Nov. 30, so more storms are possible. The Gulf of Mexico and tropical Atlantic waters are still quite warm.”

When Hurricane Laura  hit the Gulf Coast, the trucking market’s tight capacity coupled with this region’s lack of logistics activity meant relief efforts had to be sourced from Dallas, Shreveport, Louisiana, and other cities with established logistics networks. The tight market also means that many truckers may choose to serve their contracted or spot market loads as opposed to bidding on FEMA contracts.

“It will take a long time to clean up from this,” said Kathy Fulton, executive director of the American Logistics Aid Network (ALAN), the country’s most notable humanitarian logistics organization.