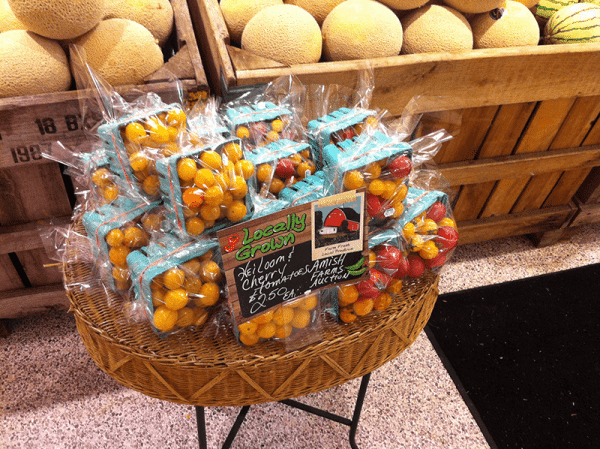 Ohio continues to be fertile ground for sales of locally grown produce.

“We try to have the products in the stores we service — the same day it comes to us,” Arena said.

A flashpoint for local produce sales is the Mount Hope Produce Auction, which offers fresh fruits and vegetables for 100 or more buyers during the summer and fall.

“A lot of stores are pushing local, and that helps us,” said Jim Mullet, sales director for the auction, which has been operating since 1995.

“A few of the bigger (retailers) know if they want to compete with their neighbors they have to do local-grown.”

Ohio products often are available from early May to early November, Mullet said.

It would sell briskly year-round if it were available, said Tom Sirna, president of Ravenna, Ohio-based distributor Sirna & Sons Produce.

“Every year it increases, and everyone wants it longer,” he said. “Taste is what it is all about.”

“Everybody from every state says our local produce is the best, but Ohio does an exceptional job with tomatoes and corn and, later in the season, peaches, pears and apples,” he said.

“Obviously, homegrown has gained traction in the last four or five years,” he said.

“More appealing to the people, and our local chains here in Ohio and Michigan have shown great support. It does make you proud when you walk into the local chain store and see your own label on stuff. They’re been very good to work with.”

Local produce is just a part of a healthier consumer buying trend, though, said Brian Kocher, president and CEO of the Castellini Group, a distributor based across the Ohio River from Cincinnati, in Wilder, Ky.

“We have invested heavily in our capabilities to provide our customers with a wide array of offerings from conventional to organic produce to processed product for retail, foodservice, convenience and home delivery channels.”

On the retail front, Kroger still dominates the southern half of the state, while Giant Eagle holds sway in northern Ohio. Walmart holds second place in both regions.

“Walking into a grocery store and seeing all the vibrant colors the produce department allows for sets the tone for a great shopping experience,” she said.

“That being said, every customer has different needs. That’s why you see produce merchandised in different ways.”

“As customers demand more information about where their food comes from and their desire to have it come from close to home, my members respond by providing as much locally sourced products as possible.”

“There will always be a place for independent grocers, and Ohio is very blessed with a large population of independently owned stores,” she said.

“That being said, those that are surviving are doing so by meeting the needs of their customers — by way of personal customer service, clean, well-lit stores, a strong produce department (as well as the other perimeter departments) and providing an enjoyable shopping experience.”

“We do find success working with smaller regional players that are willing to try new exciting things,” he said.

“Everybody’s looking at how they can differentiate themselves.”

Organic fruits and vegetables occupy only a niche — but an important one — in Ohio, Mullins said.

“Most grocery stores do offer an organic produce section,” she said. “With today’s emphasis on health and wellness, many customers lean toward organic produce.”

There seems to be some confusion between the organic and homegrown categories, Mullins said.

“In my opinion, the labels of organic and local are becoming a bit slurred,” she said.

“The average customer may consider a local product to be organic — which may indeed be true, but not necessarily.”

“For our business, it’s all about what’s something new and unique we can offer to the marketplace, whether it’s foodservice or retail — how can we offer something different?” DiNovo said.

“We’re looking to really lead new product innovations, so organic offers a bit of niche that others might not do,” he said.

In a state that features major cities such as Cleveland, Columbus and Cincinnati, foodservice opportunities abound for produce suppliers, said John Barker, president and CEO of the Columbus-based Ohio Restaurant Association.

“All of the larger and mid-sized markets in Ohio feature a range of restaurant styles and great culinary innovation,” he said.

“It’s fun to see the proliferation of chili in Cincinnati, hamburgers in Columbus — including the veggie burger from White Castle — and outstanding ethnic foods in Cleveland and Toledo. Towns with robust college populations, such as Bowling Green, Athens, Youngstown, Kent and Oxford cater to young consumers with on-trend fast-casual restaurants.”

Young adults are sustaining a vibrant restaurant scene in the cities, and that drives produce sales in foodservice, Sirna said.

“I truly feel the millennials are in the foodie category,” he said.

“Independent restaurants continue to open. People continue to eat healthier which fits right in to driving produce sales. This also increases retail sales for those who buy fresh.”