Business is booming at many of the nation’s largest ports, fueled by a strong U.S. economy and, according to experts, a rush to import and export goods before the Trump administration’s tariffs take hold on products from China and other nations.

And at the Port of Los Angeles, the nation’s biggest, business is really booming — recording its busiest July in history.

Port officials said 833,568 20-foot equivalent units (TEUs) were processed last month, the strongest July in its 111-year history. That exceeded July 2017 results by 4.7% and was the fourth busiest month on record.

“With a robust economy and cargo owners moving goods ahead of expected tariffs, our terminal operators, labor force and supply chain partners seamlessly moved a record amount of cargo across our docks,” said Gene Seroka, executive director of the Port of Los Angeles.

Port officials said they believe July’s TEU dip at Long Beach was caused in part by concerns that “escalating tariffs could slow activity” during the remainder of 2018. 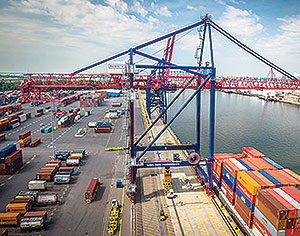 Some trade experts said Long Beach may be the first indicator, even while other facilities are still running at full speed.

“I am sure that part of it has to be that the economy is growing at a healthy clip, 4.1% in the last quarter, but it is almost surely the case that the threat of tariffs from the White House and the threat of tariffs overseas has to be causing a temporary blip for ports,” said attorney David Spooner, partner at Barnes & Thornburg and a former assistant secretary of commerce in the George W. Bush administration. “When the government released its latest quarter GDP numbers, a huge chunk of the upturn in GDP was because of surging U.S. soybean exports and it was taken as a given that soybean exports from the U.S. had surged because of the threat of tariffs from China, and people were trying to beat the tariffs.”

“July was an incredible start to our fiscal year, with double-digit growth across our container, breakbulk and dry bulk operations,” said Griff Lynch, executive director of the Georgia Ports Authority.

The Northwest Seaport Alliance that operates facilities in Seattle and Tacoma, Wash., saw an 8.8% increase in TEU volume in June, reaching its highest level since 2010, moving 144,491 TEUs. Officials said June foreshadows the strong peak season that forecasters are expecting, but shippers may be trying to get ahead of the upcoming tariffs.

“Importers know tariffs are coming — may come — and they rush stuff in to beat the tariffs, and that has to be happening now. It’s almost like getting a caffeine high and coming down later,” said Spooner. “What folks are surely doing is bringing in goods as fast as they can to beat the tariffs, but then storing them in a warehouse (to get them into the U.S. before the tariffs) and building up an inventory, which will cause imports to fall dramatically later.”