The proposal, announced March 5, calls for the tax hike in three 15-cent increases from Oct. 1, 2019, to Oct. 1, 2020. (Some tax relief would be offered to lower income families.) The tax increase is meant to generate $2.5 billion a year in revenue, which would be directed to the new Fixing Michigan Roads Fund and devoted to the state’s most important commercial routes.

The state’s current excise tax rate is 26.3 cents per gallon for both gasoline and diesel, according to the American Petroleum Institute.

“We have the worst roads in the country and I am proposing a plan that will permanently fix our roads while keeping the costs fair for seniors and low-income families,” Whitmer said in the announcement. “I know this won’t be easy, but with one historic vote we can make the investments that are necessary.”

Michigan’s infrastructure has room for improvement. The state received a D+ on the American Society of Civil Engineers’ infrastructure report card issued last March. Roads and stormwater management systems tied for the worst grade, each receiving a D-.

If approved by the legislature, the 45-cent increase would make Michigan’s gas tax the highest in the country. Currently the highest fuel tax rates are in Pennsylvania, where the tax on diesel is 75.2 cents per gallon and the gas tax is 58.7 cents per gallon.

The budget plan also emphasizes water and environmental infrastructure. It proposes $13.9 million for the Department of Health and Human Services to better monitor public health threats, including contaminated drinking water. The budget proposal also directs $1.4 million for a three-year project to take inventory of hazardous materials pipelines that cross waterways in the state.

Whitmer, a Democrat, was elected Nov. 6. She may encounter obstacles in getting her budget plan approved because the state Legislature has a Republican majority. The Senate has 22 Republicans and 16 Democrats; the House is made up of 58 Republicans and 52 Democrats. 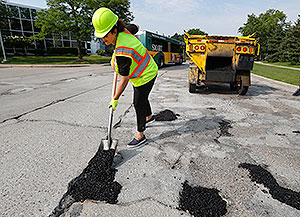 Whitmer fills a pothole in Southfield, Mich., in August 2018, during her campaign for governor. (Paul Sancya/Associated Press)

Some Republican lawmakers, such as Senate Majority Floor Leader Peter MacGregor (R-Rockford), have expressed doubts over the budget proposal.

“Already I am hearing from constituents in our district who are concerned about tax increases and I agree that such drastic moves could hurt hard-working families and job providers,” MacGregor said. “I am confident that we can approve a budget that continues to invest in our shared priorities while limiting the impact on taxpayers. I am eager to get to work and look forward to passing a balanced budget ahead of schedule for the ninth straight year.”

Whitmer is one of a few governors who has recently proposed fundraising mechanisms for infrastructure projects. Alabama Gov. Kay Ivey announced Feb. 27 plans for a 10-cent increase to the state’s fuel tax as part of her Rebuild Alabama Infrastructure Plan to generate money for transportation projects.

Connecticut Gov. Ned Lamont’s budget proposal, presented to the General Assembly on Feb. 20, includes two possible plans for electronic tolling: one that would toll only trucks and one that would toll cars and trucks. The toll money would be directed to infrastructure projects to address congestion.