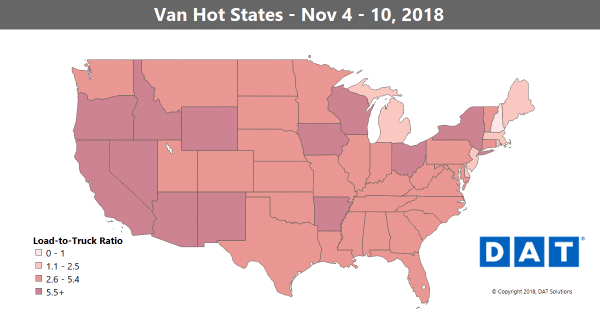 With Thanksgiving approaching, it’s the reefer segment that is driving seasonal demand, as grocery stores prepare for the big day. And with e-commerce season still building, we may soon see an increase in van demand and rates too.

DAT load boards provide the largest and most trusted digital freight marketplace in the trucking industry, with more than 279 million loads and trucks posted annually, plus insights into current spot market and contract rates based on $57 billion in real transactions.

There has been a strong freight surge moving from Los Angeles toward the East, which is causing higher outbound volumes in cities like Chicago, Columbus and Memphis. That caused more lane rates to rise than fall last week for the first time in several weeks.

The main driver of demand continues to be the Los Angeles freight market. Rates out of L.A. averaged 4% higher last week and are about 8% higher over the past month. Other than a small bump from Seattle, L.A. is the only major van market in the U.S. with rising rates. Let’s look at some lanes:

Most markets were in rough equilibrium last week. Buffalo registered the largest decline, and that was less than 2%. Rates seem to be waffling a bit as an increase in loads is meeting plentiful supply of equipment.

Reefer freight is the only segment showing solid gains. Last week on the top 72 reefer lanes, twice as many lanes had rates go up than go down. We’ve seen solid freight volumes coming out of California and most of the West, and even Central Florida. That has pushed prices higher.

The load-to-truck ratio for reefers increased 4% last week, to 7.0 loads per truck.

Western produce picked up in nearly every market, led by gains in Twin Falls, ID and Fresno in Central California. Even Lakeland, FL had a bit of a bounce.

As freight picks up in the West, we’re seeing a slowdown in the Midwest, which is tempering prices.