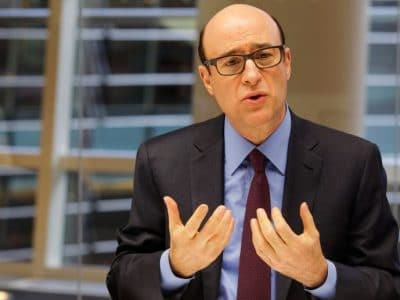 XPO Logistics Inc.’s XPO 1.02% growth slowed in the third quarter as a customer bankruptcy weighed on results, prompting the company to lower its 2018 guidance.

Analysts polled by FactSet expected $4.4 billion in revenue and adjusted earnings per diluted share of 98 cents. The bankruptcy lowered profit figures by 7 cents a share, the company said.

The company lowered its full-year 2018 target for adjusted earnings before interest, taxes, depreciation and amortization to approximately $1.59 billion, down from at least $1.6 billion it had projected earlier.

“We actually delivered record third-quarter results,” including a 46% jump in net revenue in the company’s freight brokerage unit, XPO Chief Executive Bradley Jacobs said in an interview. “From an operating basis, it was a strong quarter.”

The company said the revised Ebitda target primarily reflected the impact of a single customer bankruptcy in Europe, which led to a $15.6 million charge. XPO declined to name the customer, but in August the company stopped processing orders at two U.K. warehouses it ran for British department-store chain House of Fraser, after that company entered into the U.K. equivalent of bankruptcy.

XPO is one of the largest third-party logistics providers in the U.S., offering services such as trucking, freight brokerage, e-commerce fulfillment and last-mile delivery to clients including IKEA, Cummins Inc. and Industria de Diseño Textil SA’s Zara clothing chain.

Operating income in XPO’s transportation segment rose 34.4% in the third quarter compared with the same period in 2017, on growth in global freight brokerage and improved margins in its North American less-than-truckload unit.

But profitability fell in XPO’s logistics business, where the bankruptcy charge and startup costs for new contracts in Europe and North America contributed to an 11.6% slide in operating income.

It has been more than a year since Mr. Jacobs said XPO was prepared to spend up to $8 billion on mergers and acquisitions. He declined Wednesday to discuss the timing of any future deals, but said valuations have come down and that some of the roughly a dozen acquisition candidates on the company’s short list are “getting more ready and more open-minded about selling.”

—Maria Armental contributed to this article.

Write to Jennifer Smith at jennifer.smith@wsj.com